I’m not trying to be insufferable when I say that I’m kind of split on Slater’s 50/50.

The 50/50 thing comes from their burger patty – which consists of 50% ground beef and 50% ground bacon. Which sounds like 100% heaven for bacon lovers (percentage joke!). And this kind of bacon ubiquity has become a weird culture unto itself, what with Epic Meal Time’s dedicated use of the crispy cut of meat, and even a restaurant in Silverlake that serves “Popcorn Bacon.” Some say that bacon has culturally jumped the shark, but, technically, bacon is still pretty delicious.

Slater’s 50/50 has a few locations in California, the closest to us being in Pasadena. It feels like a neighborhood sports bar – Applebee’s-esque lighting, televisions EVERYWHERE (even above the urinal in the men’s bathroom), servers that ask you if you are “ready to rock,” etc… – so there’s kind of an aggressively carnivorous feeling to the place.  We had a reservation, but note that they only take reservations on weekdays, and on any given day, a walk-in can be a wait of up to 90 minutes.

We started with the appetizer sampler: six fried fixins, each with their own dipping sauce. In order of my preference, we had the sweet potato fries with pumpkin sauce, beer-battered jalapenos with cilantro-lime sour cream, fried bacon mac n’ cheese balls with Tapatio ranch, fried dill pickle chips with original mustard sauce, Slater’s fries with Slater’s bacon ketchup, and the beer battered onion rings with BBQ sauce. The pumpkin sauce was so sweet, it could have been saved and served with dessert; even our very own Dessert Corner’s Marie (who does not like sweet potato fries) liked it.

For my burger, I was determined to be a purist about it so I went with the classic 50/50 Burger (which comes with a 50/50 patty topped with a sunny side up egg, avocado mash, pepper jack cheese and chipotle adobo mayo on white brioche). That’s the base line. It just gets more ridiculous from there.

Many of the burgers are hilariously decadent. There are amalgamations like the B’B’B’ Bacon Burger (50/50 patty with bacon American cheese, sunny side up egg, thick cut bacon and bacon island dressing on a bacon pretzel bun). To review, that’s a bacon patty with bacon on it, served with bacon dressing on a bacon bun. Oh yeah, and cheese and an egg. There was also the Peanut Butter and Jealousy which is Sterling Silver ground beef topped with thick cut bacon, creamy peanut butter and strawberry jelly on a honey wheat bun – which in a more adventurous mood, would have totally been my thing. But I was resolved to try their namesake burger, undiluted by any gimmickry, to see if it was any good without all the distracting bells and whistles.

I got to choose from either a ⅓ lb, ⅔ lb, or one full pound patty (side note, those are the weights AFTER they are cooked), which, like the “Like It,” “Love It,” or “Gotta Have It,” sizes at Coldstone, doesn’t matter because you will feel sick 3/3 of the time (fraction joke!). Anyway, they asked me how I liked my burger cooked, and I asked them what they recommended, as I have never cooked or ordered a burger of two meats. The server suggested medium-well, and warned that the patty will end up looking more pink than a typical medium-well due to the color of the bacon, and not to be alarmed by the pink color. This speech seemed routine, and seemed to be the result of a lot of customer complaints about their cow-pig hybrid meat patties looked too pink.

Stu ordered the Fried Chicken and Pancakes, but that’s a different story, and I will leave it to Stu to tell his side of the tale. 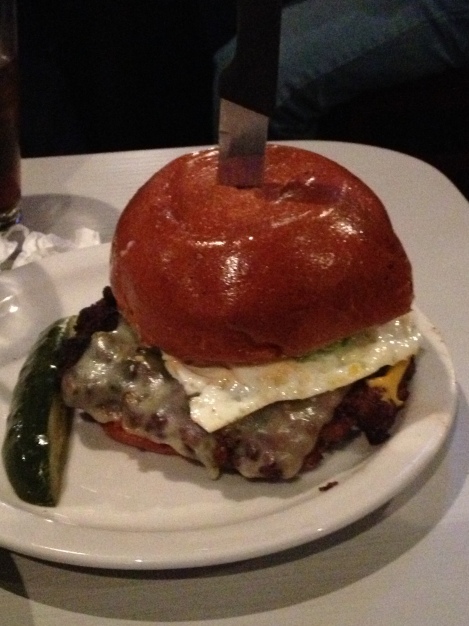 My burger came with a steak knife ceremoniously sticking out of it, like some kind of Arthurian burger legend. The taste is kind of exactly what you would expect it to taste like, which is both satisfying and also disappointing. The thing with the 50/50 patty is that its hybrid of beef and bacon causes it to be a little less juicy than some of my favorite burgers. I love bacon on a burger because the crispness of the bacon and the juiciness of the patty create an awesome texture combinations. The bacon and the patty serve separate, but equally important purposes to the burger as a whole. But when they are both ground up and mixed together into a 50/50 patty, they sort of lose their individual great qualities. On top of the patty, was the avocado mash, chipotle mayo, pepper jack cheese and an egg, which all served the purpose of making the burger taste richer and spicier. None of the flavors stood out in an intense way nor did they blend super well either.

I think I went into the whole thing with the wrong attitude, though. I came into Slaters wishing to distill each of the elements of their burger to its essential parts; to see if it would hold up in its simplest form. But I don’t think anyone goes to Slaters for subtlety. These burgers are huge ( the ⅔ lb. patty was too much for me), and they have a ton of stuff on them, and they are half-made with BACON for crying out loud. So my pursuit of trying to search past all the bells and whistles was a futile one. You’ve got to come here FOR the bells and whistles.

One response to “All the Bells and Whistles: Slater’s 50/50, Pasadena, CA” 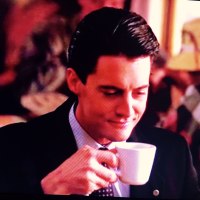