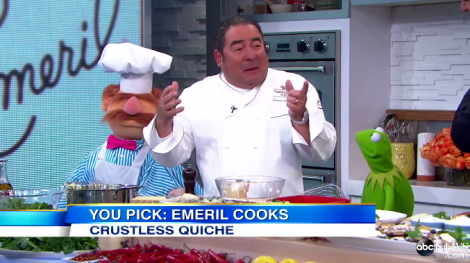 Last month, the instantly recognizable, mushmouthed cajun chef, Emeril Lagasse, paid a visit to the Good Morning America set for the release of Muppets Most Wanted. Emeril was teamed up with Kermit and The Swedish Chef for a chaotic and bizarre demonstration of a “crustless quiche (Swedish-style)”. If nothing else, the segment is a fine example of how fun it can be to just let yourself “go with the flow” – especially when it means disregarding the discipline of an accomplished chef.

What starts out as your typical, loose morning show cooking segment quickly unravels as The Swedish Chef refuses to accept the role of the sous. Emeril also wants to be in control of the situation, but he shows his good nature early on by relinquishing his command of the station, all the while listing off each ingredient in order. (In case you want to play along at home, you’ll need: leeks, olive oil, spinach, garlic, black pepper, 6 eggs & 6 egg whites, evaporated milk, gruyere, and nutmeg.)

Emeril’s notoriously slurry speech is apparently the perfect match for The Swedish Chef, whose characteristically under-enunciated answers provide the biggest laughs in this video. The climactic moment has to be when the host asks, “400 degrees for how long, Emeril?” Chef Lagasse replies, “Oh my god. At this point, who really cares?” BAM! 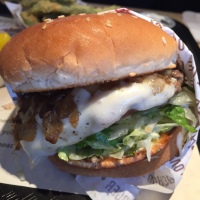