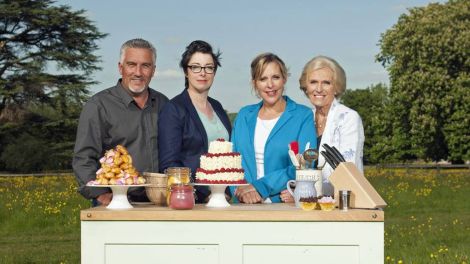 With Thu on his tour, and me on Soylent, Two Men Chew has been pretty low key for a while. I’m not saying that we haven’t actually eaten this whole time, but it was nothing to write home about. We’re breaking the silence with a quick food TV suggestion before we put up new reviews—because we have been consuming some really good TV.

The Great British Baking Show has been around for years, and I am just now getting into it (hoping to catch up in time for the new season airing in July). When GBBS first aired, I was strictly abstaining from competitive cooking TV shows. I was Ramsay-ed out; Top and Master Chef’d within an inch of my life. All the manufactured drama and the boot camped contestants whipped into shape like so much meringue, it was all blending together into a bouillabaisse with little nutritional value. The only programming that could possibly be worse for my psyche is alternating Man vs. Food and The Biggest Loser for hours on end. Because I’m a glutton (for punishment).

I was skeptical about getting into another competitive cooking show, but my affection for GBBS has been steadily rising like properly proofed dough ever since I started watching it yesterday. Right off the bat, it’s evident that GBBS has a kinder, gentler show. The hosts are Sue Perkins (a QI regular, and Sue of “Mel & Sue”) and Mel Giedroyc (Mel of “Mel & Sue”), both whipsmart and endearing; the show is judged by famed pastry chef/baker extraordinaire Mary Berry (like Essex’s “Nanny Pat,” but with a whisk) and the improbably named Paul Hollywood (at first glance, you expect Paul to be a British version of the “gruff cooking show judge” but he is a pussycat). The sensibility of the show is… friendly—there are no shouting matches, no backstabbing, no catty remarks (the closest Sue gets to dissing anyone is making a joke about swiss rolls: that’s when you roll Roger Federer downhill). When someone is eliminated, the contestant is hugged in a judge/host “sandwich.” Is this what a British Baking show is all about? After all, there are way more references to Shakespeare than “donkeys.”There is an easy camaraderie (Perkins teases Paul for being “so poncey”). This is the anti-Ramsay.

Did I mention how clever the hosts are? Maybe I’m just tired of what has been passing for wit on some (Daily) shows, but here are some examples of jokes that made me laugh out loud. You can judge for yourself whether this is the show for you:

Appraising a homemade tool for poking holes in biscuits to let air out, it is quickly referred to as a sort of “biscuit iron maiden.”

One of the episodes has a “Right Royal Rye Roll” challenge. The host says, “This is our most alliterative challenge to date.”

Undercooked pies are referred to as having a “bit of a soggy bottom.”

As the tarts challenge was winding down, the host yells out, “You can’t keep a tart waiting!”

One Scottish contestant, on the older side, was full of incredible lines: “Haggis, I know you’re very smelly, but you’ll soon be in my belly.” 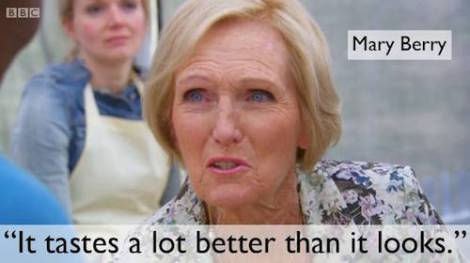 The Great British Baking Show is coming back to PBS on July 1, and you can catch early episodes on Netflix now.