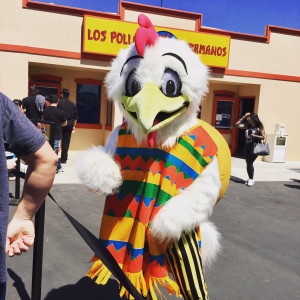 “Breaking Bad” is one of those shows that will live on for decades as a modern masterpiece. Part of the show’s appeal are the strong supporting characters; Saul Goodman and Gustavo Fring are just two of the colorful personalities that bring people back to the not-so-fictional Albuquerque again and again.

One of the characters who is guaranteed to live on long after the final episode of that awesome final, fifth season of the show aired is the aforementioned Saul (played by Bob Odenkirk). His spin-off series, “Better Call Saul,” is beginning its third season on April 10 on AMC. The series is a prequel to the events in the first season of “Breaking Bad,” and before Saul “It’s All Good, Man” Goodman became a slimy son of a bitch.

AMC is celebrating the launch of the third season with a Los Pollos Hermanos pop-up in the Arts District today. This standalone restaurant was erected, complete with signage and 100% realistic furnishings, virtually overnight and is carbon copy of the mock fast food restaurant that AMC cooked up for SXSW in Austin, Texas, earlier this year. Los Pollos Hermanos is the tacky Southwestern chicken chain run by Fring (AKA “Gus,” played by Giancarlo Esposito) who will be featured in season three.

I was at the event, and the mood of everyone in my section of the line was unrestrained giddiness, except for the lady standing behind me who kept sighing like she’s been on hold with her insurance company the whole time. There were a lot of Heisenberg Homies in attendance (that’s what I call the guys who show up with fedoras mimicking Walter White’s alter ego from the show, like when he really starts to be an antihero), and although I was stoked to see all the props I started to realize I just wasn’t nerdy enough to appreciate this experience.

How nerdy was it? The lady behind me had a “Breaking Bad” tattoo. Cool idea, and “Breaking Bad” is one of my favorite shows, but I doubt that would age well on me. I’m sure that one morning I’d wake up and kinda regret my decision.

“Hey dude, what’s your tattoo supposed to be?”

“Why does it say ‘Jesse Pinkman or die?'”

(Keep in mind this exchange would probably be happening in twenty years when I’m 61, and I’d probably have forgotten all of the characters’ names. Not to mention the basic plot and storylines.)

Most of my tattoos are skateboarding-related and I’m already anticipating the day when I’ll feel like a dork for having them. Like, when hoverboards are an ACTUAL, real thing. Not just douchey mini Segways. 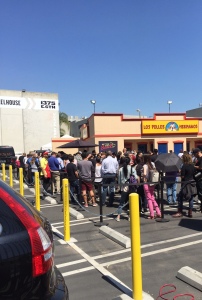 A team from The Wrap was going down the line of literally hundreds of people, sticking a camera and microphone in everybody’s face and asking, “Do you consider yourself a superfan?” I sheepishly shook my head and looked away, thinking, Well I’m not a SUPER fan but I’m an okay fan. If he had asked me something specific, even an easy trivia question like the “Heisenberg” tidbit I dropped in an earlier paragraph, I’d probably blow it. 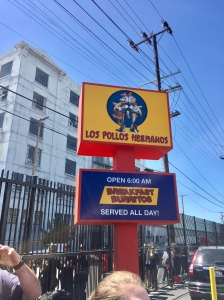 But then I heard the questions he was asking and I probably would’ve aced it. For example: “Did you come for the curly fries or did you come for the meth?” Are you serious? Get the fuck out of here. Could I do better? Well, yeah:

“Did you come for the curly fries or did you come for the nuanced portrayals of desperation and complex world-building?” The Wrap sucks. Later, he asked a couple if they came for the chicken, then he corrected himself and said there’s no chicken.  Then he started to throw a little shade about why there wouldn’t be chicken at this special, crazy two-day pop-up that is basically a step-and-repeat with curly fries.

At 82 degrees, it was hot on that blacktop. People were excitable and occasionally bitchy, but for the most part everyone was in good spirits. The staff working the event all had bubbly personalities. I had an extended conversation with the gatekeeper (at one point I was at the head of the line for a few minutes) and she was the queen of small talk. I was, comparatively, responded in grunts and clicks. I had my eye on the front of the line for close to 40 minutes as I waited, and she never once stopped smiling. She seemed to really love what she was doing. The guy (or girl) in the chicken suit? I have no idea, but the chicken killed it. 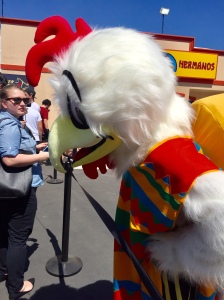 You gotta give it up for this chicken!

Being in the Los Pollos Hermanos was kind of amazing. I went to the location the day before the temporary building was actually completed and I didn’t expect much. Being inside the air conditioned space, fully decked out with flat screen TVs and tables and cheery staff was sick. I expected to pushed on through like cattle, but the event staff were chill. Even the person who was the obvious “showrunner” at this event was kinda cool, but intense. The menu behind the counter featured a diverse range of meal options (including a very reasonable chicken wrap for $4.95). 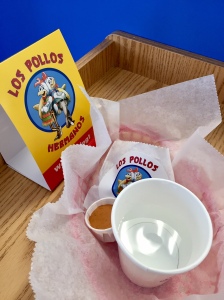 Welcome to Los Pollos Hermanos!… Can I stop smiling now?

This is what it looked like the day before.