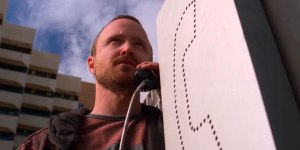 With yet another successful Los Pollos Hermanos pop-up event in the books, AMC has announced a surprising new food series spinoff to capitalize on “Better Call Saul”‘s third season premiere.

The series, “Pinkman’s Hot Dogs,” will take place two years after the fateful events of the “Breaking Bad” series finale, the “Felina” episode. For those who might not remember: Walt tackled Jesse, saving him from some junk in the trunk.

There was one last loose end to take care of as Walt bled out in the driveway of the local crank factory. (Bye, Olivia. Enjoy your Stevia in hell!) Jesse hopped in the El Camino and floored it to god knows where.

Well, according to today’s announcement, Jesse Pinkman floored directly to the Albuquerque Culinary Community College. Nine months later he was the proud recipient of a cooking degree. Specializing in hot dog cooking and sausage technology, Jesse is on the path to revolutionizing the world of artisanal dogs, brats, and wieners.

Episode one of “Pinkman’s Hot Dogs” shows Jesse, virtually unrecognizable in a tucked polo shirt and visor, greeting a long line of tourists waiting for a taste of his signature dog, “The Bitch.”

His well-worn phrase—”So, you wanna try The Bitch, biiiitch?”—never fails to elicit giggles among the ladies and admiring grunts among the fellas. With facial scars still visible from his unforgettable time in captivity as a meth cooker par excellence, he is prone to “Jacob’s Ladder”-level flashbacks at the worst possible times. He will never forget about his previous life, no matter how many wieners he turns out.

By the end of the first episode, Jesse needs to make a powerful decision. Does he stay at his world famous hot dog stand and continue to be a local celebrity? Or does he go look for the $80 million buried somewhere in the desert? Or, maybe deal with the cease-and-desist from Pink’s Hot Dog’s?

With “Pinkman’s Hot Dogs” already picked up for a second season, we’ll soon find out. In the meantime, get ready for AMC’s Mad Men spinoff suggesting an unlikely marriage of two beloved characters: “Peggy Sterling, FBI.” 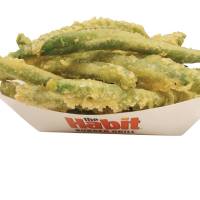